In the decision making of AVR, the following should be taken into consideration:

​The guidelines classify progression of AS into 4 stages (A to D):
﻿Assessment of Severity:﻿
The severity can be assessed by either echocardiography or cardiac catheterization.

​Echocardiography: ﻿
Correlation of Echocardiographic Measurements with the
Severity of Aortic Valve
Gradients are significantly influenced by the cardiac output and therefore the aortic valve orifice area should be taken into consideration in preference. 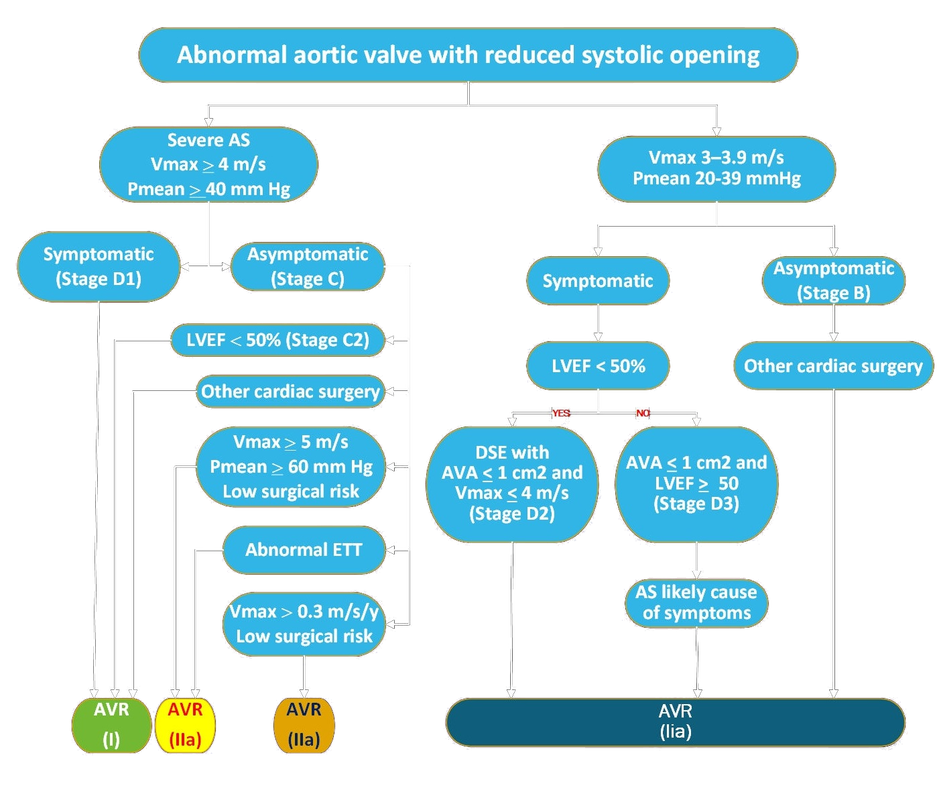 Surgery for Asymptomatic Aortic Valve Stenosis * INDICATIONS               i. Abnormal response to exercise (hypotension, symptoms).
Note: Stress testing is contraindicated in the symptomatic patient with severe AS.
ii. Severe AS with high likelihood of progression (elderly patients, calcified valve, presence of
CAD) or if there will be a potential delay from symptom onset to surgery.
Estimated rate of progression:
- Reduction of AVA by 0.14cm2 per Year.
- Increase in the mean gradient by 7 mmHg per year.
iii. Critical AS (AVA<0.6 cm2, mean gradient>60mmHg, jet velocity>5.0 m/s).
Symptomatic Severe Aortic Stenosis
Dobutamine Stress Echocardiography (DSE)
Associated Ascending Aorta Dilatation:
Back To Top↑
﻿* Based on 2014 ACC/AHA Guidelines (http://www.cardiosource.org/)